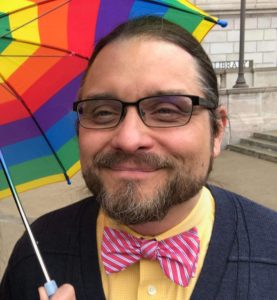 Eric was a founding co-head of Cinema Rex since CONvergence started in 1999, until joining the CONvergence Board in early 2022. He is a lifelong geek with a broad range of nerdy interests: genre books, TV, and movies, but also board and card games, sewing and costuming, and home brewing of beer and cider. Eric has been an entertainer at the Minnesota Renaissance Festival for decades, and is a performer and assistant director of the local comedy show Vilification Tennis.

He has two cats, Rhubarb and Gul Ducat, and a dog named Ada.
↑