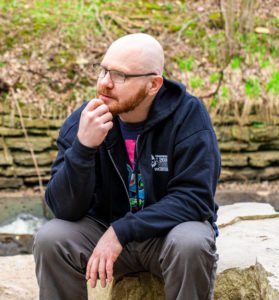 Chase is a 5’9″ bipedal ape descendant. First discovered in the 80s, he didn’t really do anything at the time, mostly on account of just being born. As he grew, he developed into a fine, young nerd. In high school he spent too much time watching the Rocky horror picture show, playing and collecting collectible card games and D&D.

He has also known for his love of the snow, so much so that he went to one of the few places in the US that gets more snow than the Twin Cities, the upper peninsula of Michigan. While there he finished his degree in mechanical engineering with a minor in theater. He is currently working on getting his MBA.

My convention experience began around 2005ish with my first anime detour, it was an incredible experience and I sought out other conventions. When I attended my first CONvergence in 2007 I was hooked. I have heard other people describe their first experience at CONvergence being something magical. I went to help with load out and have stuck around ever since.

I began as a subhead in Operations and worked in that role while exploring other departments such as Volunteers and the Mark Time Radio Show. After Nadim was elected to become the facilities director, I was asked to be one of his administrators and have assisted him through the changes and challenges we have faced in that time.

I hold a degree in welding and metal fabrication, a degree in mechanical engineering and I am currently working on an MBA through Metro State. I have a varied work experience and have gained insights from a number of different levels within an organization. When I began my career, I worked as a welder on a production line. After I earned my degree I worked as a systems engineer, and later still I was a manager and supervisor overseeing a team of 13, spanning all three shifts.

Outside of all this, Im a nerd at heart. I have fallen in love with 3d printing, taking a concept from my head and bringing it into the world is such an amazing feeling. I love Futurama and Hitchhikers Guide to the Galaxy, I have seen LotR:Two Towers in theaters more times than I care to admit. And I am always down for a game of Mario Kart.